Looks like the rumors are true! Taylor Momsen is the new face of British retailer New Look, following in the stilettos of Alexa Chung and Lily Allen. TayTay posed for the brand’s spring/summer 2010 campaign, and here’s a first look behind the scenes of the photo shoot: 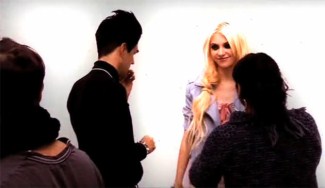 Video: Check out this behind the scenes look at Taylor Momsen’s shoot for the spring/summer 2010 campaign at British retailer New Look.

In between preening and pouting for the shoot (which we have to say she’s awesome at — with those mile-long limbs and that flawless bone structure, girlfriend was born for the runway), the Momser does a talking head about her personal style. Her signature? "My eyes," she says. "I like to play up my eyes for sure. With, uh, black." You don’t say. We never noticed.

…Oh, those are your eyes? All this time we thought you were wearing a mask like the Hamburglar. Good to know our Big Macs are safe from you.

While Taylor claims not to have a style icon, she says she’s inspired by her favorite musicians. She names the Beatles as her all-time favorite. We don’t recall Ringo being a huge fan of eyeliner and ripped stockings. But the other groups she mentions — Oasis, Nirvana, Chris Cornell of Soundgarden — actually make perfect sense: The New Look line is anti-glam glam, full of babydoll dresses, slouchy clothes, and we even spotted some flannel. It’s a full-out early-’90s grunge revival, and Taylor’s a perfect fit for it. Although we’re not sure how we feel about a 16-year-old praising Kurt Cobain in the same breath as the Beatles. She doesn’t think Nirvana’s retro, does she? 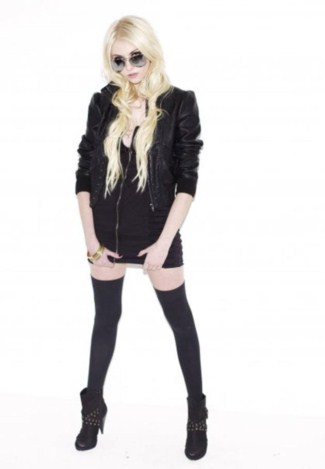 Photo: Could those socks BE any higher? Well, we know the dress hemline could be lower, at least. Love the New Look style in general, just need to de-skankify it a tad, Tay!   Source: GossipGirlShow.com