The Dancing With The Stars Controversy Explained 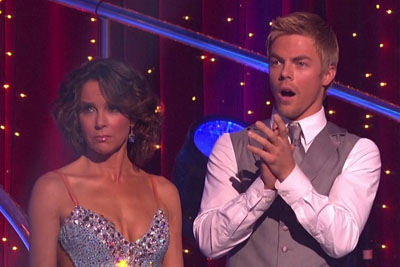 On last night’s Dancing With The Stars, we were all shocked that Bristol Palin was sent through to the finals. Brandy and Maksim Chmerkovskiy were as shocked as any of us, but at least now we know why she got through…and it wasn’t based on any dancing talent (or lack thereof) that she possesses.

As you can see from the photo above, even Jennifer Grey and Derek Hough were both surprised when it was announced that Brandy and Maks were going home.

Apparently, the Tea Party had launched Operation Bristol in order to keep Bristol on the show, using whatever means necessary. On one of their sites, they say to make up email addresses to vote with, to ensure that Bristol didn’t get sent home last night.

From one of the comments on HillBuzz.org, they say to basically cheat the system:

Here’s a hint: They don’t have to be VALID email addresses to register them with ABC.com, there is apparently no validation process. The just have to be formatted like a valid email address, and you must use a valid zip code and a birthdate that makes you old enough to vote. I’m voting like a democrat, all night long…

They even go as far as taking a swipe at Carrie Ann Inaba for giving Bristol an 8:

What is wrong with that Carrie Ann?I think she is just jealous.Bruno and Len gave her nines but Carri Anne could only manage an eight.

She just got divorced. She had a horrible marriage. She is not getting sex. Sarah Palin reminds her of all she doesn’t have. So, take it out on her kid.

Even after voting via telephone was over with, they still persisted:

Yes. Phones are only open 1/2 hour after show is over.

Delete your cookies and continue to vote email addresses. Let me know if you need instructions. I’m doing this in IE because I never use IE and don’t care if I delete my cookies. I’m using my emails over again.

I’m afraid the libs are on voting for all the other three. We can’t give up. We can vote online until 11 AM ET tomorrow.

So if she wins, just know that it wasn’t based on merit at all. At least if the Tea Party is kept busy using their time to keep Bristol Palin on Dancing With The Stars, we won’t have to worry about any other mischief they could be up to. It’s still fixed, I tell you. FIXED!