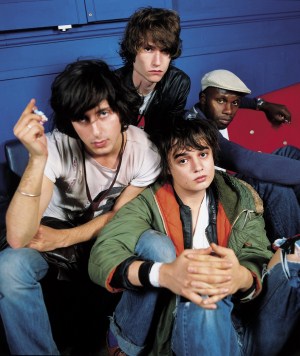 The quartet – co-frontmen Carl Barat and Pete Doherty, drummer Gary Powell and bassist John Hassall – played a short set at London’s Boogaloo bar following a brief press conference in which they discussed their return, which will take place at the Reading and Leeds festivals in August.

The rockers began their performance with a rendition of ‘Georgia On My Mind’, before launching into their own material.   At one point, the group – who split in 2004 amid Pete’s drug addiction struggles – were joined by their friend ‘Rabbi John’ to play the traditional shanty ‘Sally Brown’, before teasing the small crowd with the introduction to classic hit ‘Can’t Stand Me Now’.
However, Carl then quipped: “If you want to hear how that ends, you’ll have to come to Reading.”

Following a brief conversation with Pete, they then launched into a full version of the track, all their former animosity forgotten as they embraced during the performance.   In the question and answer session, the group insisted they had no plans to perform any new material at the festivals – because they are struggling to remember their old songs.   Pete joked: “We haven’t got plans to play new stuff because it’s going to be hard enough to work out the riffs from the old stuff."

While the ‘Up The Bracket’ hitmakers are hopeful of recording together again, they admit their tumultuous past may again rise to the fore and prevent a long-term reunion.   Carl said: "Four months is a long time for the Libertines, so whatever happens, happens. We’re going to see how it goes. If it works, it works."