The Situation Upset Over Dancing With The Stars Score 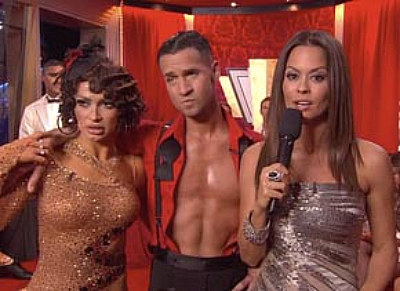 Mike “The Situation” Sorrentino is reportedly livid because he didn’t do better on last night’s Dancing With The Stars. He scored a 12 in the technique area and a performance score of 16 for his Argentine Tango, for a total score of 28. This was the lowest score of the evening and Mike’s pretty ticked off about it.

Mike was spotted outside of the studio in the parking lot, sulking, smoking a cigarette and shaking his head. Of the judge’s harsh words, he said, “I don’t know what their deal was. I really don’t know. I was upset. I actually stormed off upset because I tried so hard. I really did. I changed my haircut, I don’t know.”

He impressed himself (and no one else, obviously) with his attempt at the hard lifts they tried. He added, “Once I landed all those lifts and the judges were trashing me? I’ll be honest with you, it was in one ear and out the other. In the back of my head, I knew those lifts were extremely hard. I tried my best, and if they didn’t see it and wanted to be negative, so be it.”

Oh….wah wah. Sounds like someone is forseeing the future that he’s going to get the axe tonight. Poor baby. Ummm…no. Not really. While we know he tried his best, it just wasn’t good enough. During his performance, I feared that he was going to drop Karina Smirnoff.

What do you think? Will he get the boot tonight?