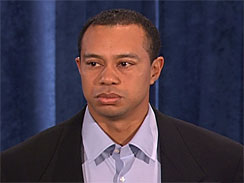 Ok, so I was curious like everyone else and wasted seven minutes watching Tiger’s rehearsed, scipted and well paid for apology.  I actually thought I was watching the Bachelor and he was going to give out the final rose at any moment.  It’s bad enough that he cheated on his wife multiple times and lied to his closest friends and family, but now he insults everyone by trying to make us believe his apology is heartfelt! He admits to being selfish, so do we further forgive that he insults the golfing community by apologizing the week of a World Golf Championship which will no doubt take the attention away from the event and on to him. The only thing Tiger accomplished today is setting a new standard, "If you get caught with your pants down you don’t go to Ophra, you now have to do a press conference on International Television".  Personally, I think Dr. Phil would have a field day with Tiger!

One final thought.  This week, Belgium suffered it’s worst rail disaster in decades, 18 people were killed.  Did they get 7 minutes on International Television, nope, but Tiger did admit that he is selfish!