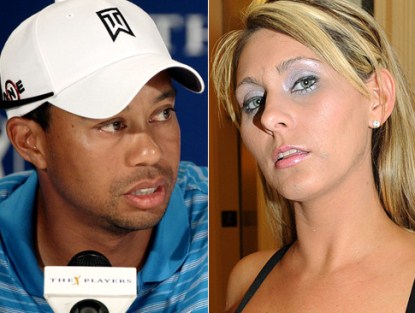 Just in case you were still planning to buy Devon James and Nick James’ Tiger Woods sex tape beware that the couple has filed for bankruptcy!   Although they signed papers claiming that they are broke their site taking pre-orders for the November 15 release of the tape was still going strong.   Between Teneal Goyco, the man the James hired to play Tiger in the tape, Devons ex-manager Gina Rodriguez who says the tape is a fake or does not exist, and Devons own mama, Sandra Brinling who claims that her daughter did not even sleep with Tiger, the chances of anyone seeing a sex tape featuring Devon and Tiger Woods are about zero.

But the bankruptcy papers they filed under penalty of perjury directly contradict that claim, with the couple listing assets at zero to $50,000. There is also no sign of the sex tape payment in the papers, which includes a complete listing of assets.  The brazen couple has a Web site that is currently active and accepting orders for the sale of the Tiger sex tape. But a close examination of the bankruptcy papers obtained exclusively by RadarOnline.com, shows that the couple does not have any assets from an outside company. (Even if James accepted payment by setting up her own corporation she would have to list it on the papers.)

The bankruptcy filing means that either the James’ filed a false claim which is punishable by jail or they do not have such a tape as their site claims.  We bet that there is no tape featuring Devon and Tiger.