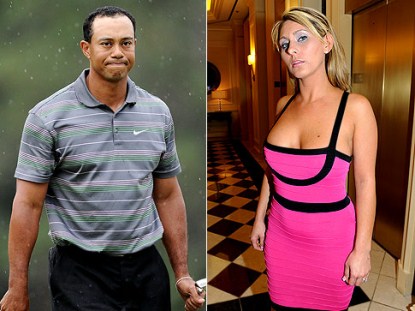 Devon James was a mistress of Tiger Woods during his marriage to Elin and claims she made a sex tape of them both during one of their sleazy encounters.  She is accepting orders for the tape on her web site TigerTapexxx.com at $39.95 plus tax!  Problem is that there are grave doubts as to whether the tape exists at all.  Her ex-manager, Gina Rodriguez, claims that there is no such tape and Devon’s failure to show any evidence, not even a 10 second clip, indicates to us that the tape is a fake – it does not exist.

Devon’s husband, a fellow named Nick James, says that he has seen the tape and that “You can see him clearly, He’s pretty dirty.”  Of course Nick wants to promote the tape since at $39.95 the earnings for him and his wife will quickly add up – that is, if people are silly enough to pay for something that most likely does not exit.  Even more to the point, even if the tape existed and was genuine, then so what?  Why would anybody pay money to watch Tiger Woods having sex with a hired mistress?  The whole sordid story of Tiger’s extensive infidelity is enough to make anyone sick – but to buy more of it has got to be crazy.