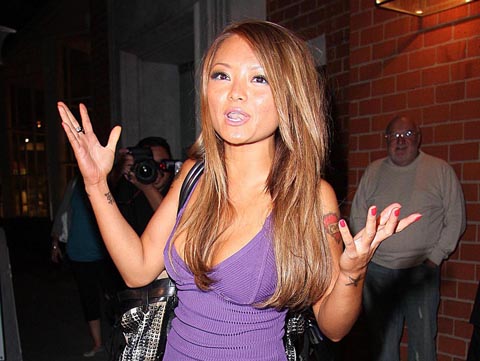 One of the companies, Vivid Entertainment, wants both the girl-on-girl and guy-on-girl configurations — but another company has already gotten a hold of one of the tapes and is angling for the second.   A source close to the negotiations tells us it’s an all-out porn war to sign Tila and distribute the tapes.  Of course neither company can do anything without Tila’s permission.  We’re guessing that won’t be a problem.  But Tila just told TMZ, “If anyone out there is trying to leak a private and personal sex tape of me that was not meant for the public, I will swiftly deal with my lawyers!”

Tila has already taken to her twitter account pretending that she is embarrassed  ya right!  We believe that.. NOT!

RUMORS ABOUT MY SEXTAPE! I AM APPALLED & I NEED MY #TILAARMY NOW MORE THAN EVER! THIS IS SICK!

Tila has already start posting her excuses, complaints, yada, yada on her blog saying no, no it is not true.  We all know the more that she says NO, the more it is true.  She is probably blogging that as she reviews her contract from Vivid for the sex tape.  She says her lawyers are dealing with everything – ya all the details of the sex tape.