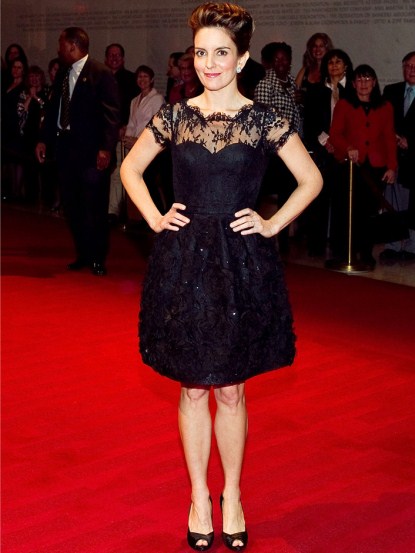 Tina Fey was the recipient of the Mark Twain prize for American humour.   The awards were presented Sunday night by PBS.   Tina who has spoofed Sarah Palin many times on SNL included comments about Sarah in her acceptance speech.  But viewers did not hear the more critical comments.  The television station decided to edit her acceptance speech and remove the comments that were less than favourable towards Sarah Palin.

“And, you know, politics aside, the success of Sarah Palin and women like her is good for all women – except, of course –those who will end up, you know, like, paying for their own rape ‘kit ‘n’ stuff,” Fey said.   “But for everybody else, it’s a win-win. Unless you’re a gay woman who wants to marry your partner of 20 years – whatever.   But for most women, the success of conservative women is good for all of us.  Unless you believe in evolution. You know – actually, I take it back. The whole thing’s a disaster.”

PBS edited out the rape kit and evolution part.  PBS claims the show was running long – more than 19 minutes behind schedule and that was their reason for editing it.   I have to comment that I cannot agree with Tina making those comments where she did.  I am not a huge fan of Sarah Palin but really there is a time and a place to voice your opinion.   I do not think an award show was the venue to do it.   Very unclassy of Tina,  just my opinion.  What do you think?