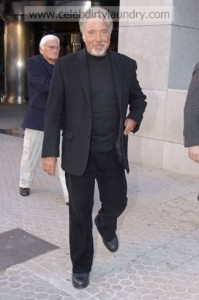 70-year-old singer Tom Jones received the huge sum for a 90-minute show at the 62nd Red Cross Ball in Monaco on Friday (30.07.10), making him the top earner for a single show, though it is believed he gave a substantial percentage of his fee to charity.  hmmmm Lets hope so!

One reveller at the fundraiser – which was held in the ballroom of the exclusive Sporting Club and cost up to 20,000 Euros a table – told the Daily Mirror newspaper: “It was a wonderful evening. Tom and his band played some of his greatest hits, including ‘It’s Not Unusual’, ‘Sex Bomb’, ‘Green, Green Grass of Home’ and ‘Kiss’, and had everyone up on their feet dancing, throwing napkins and flowers at him during the crescendo.”

Tom’s fee beats the rumoured £2.6 million offered to Sir Elton John to play for a Russian tycoon last year, Beyonce Knowles’ £1.35 million pay cheque for a performance on New Year’s Eve (31.012.09) and the £1.7 million George Michael was paid for a private 75-minute show.   But wait a second!  Those fees were for concerts – this was for a charity event.  What am I missing here?

A spokesperson for the event said: “Tom was worth it.”   The concert, which was thrown by hotel, casino and restaurant owners in Monte Carlo, made more than £10 million for the Red Cross, with the money going to help victims of the Haiti earthquake and floods in Tanzania.   hmmm and if Tom did it for free they could have made £ 13.1 million.  I really have a problem with celebs charging for charity events.  What do you think?