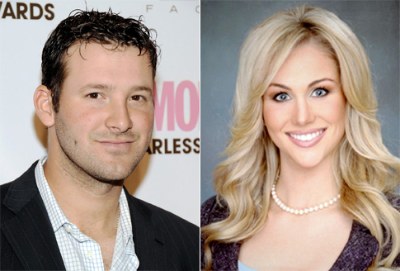 I bet Jessica Simpson is having a conniption fit of epic proportions! After Nick Lachey announced his engagement to fiancee Vanessa Minnillo, Jess announced that she’s getting hitched to her boyfriend, Eric Johnson. Now, another of her ex-boyfriends, Tony Romo, is engaged!

Hottie McHotterson, Tony is engaged to girlfriend Candice Crawford. After unceremoniously ditching Jess in an IHOP parking lot right before her birthday party, Tony has popped the question to Candice. Of course she accepted, she’s not stupid.

Now for the trifecta, John Mayer needs to come out of the woodwork and announce that he’s getting married, too. That should make Jessica combust, yes?