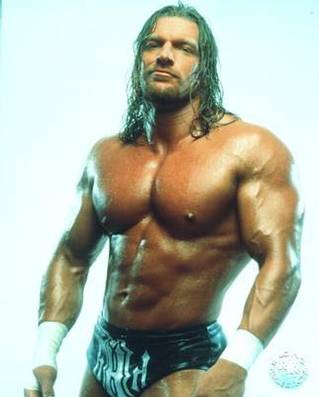 A video on TMZ  has pro-wrestler Paul Levesque, better known as Triple H, mouthing off about how a bunch of wrestler beat a bunch of MMA kick boxers in a bar fight in England several years ago.  Why do I doubt that Triple H got into a street fight?

He is known as a snob and a phony and someone who dumped the bodybuilder/wrestler Chyna to get closer to Vince McMahon’s daughter Stephanie and eventually marry her.  Everything I have read about Triple H tells me that the man is a heartless bum and someone not to be trusted.

In my humble opinion if a pro-wrestler has a serious Olympic style wrestling background then he will be a formidable opponent for MMA people since Olympic style wrestling is a truly a deadly martial art and its practicioners are both very strong and very fit in addition to having skills that can easily disable a man, and quickly.  However, in the case of Paul Levesque – Triple H – where the wrestler is a glorified bodybuilder who knows some ‘moves,’ an MMA guy in his weight class will kick his butt badly.