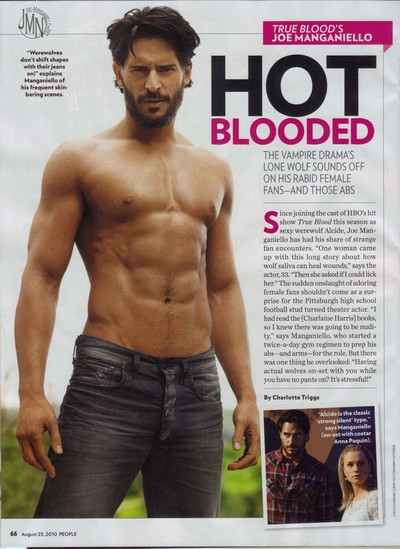 If you’ve been watching the smoldering new addition to the True Blood team, then you’re likely to be salivating over werewolf hottie Alcide Herveaux. Played by Joe Manganiello, Alcide shifts into wolf form, but he’s got to get naked first.

In a new interview, Joe talked about his first encounters with some strange female fans. He said, “One woman came up with this long story about how wolf saliva can heal wounds. Then she asked if I could lick her.”

He went on to say that he knew the part would involve taking off his jeans to show off his hot body. He said, “I had read the books, so I knew there was going to be nudity.” He didn’t count on having some wild four-legged friends on set, though. He said, “Having actual wolves on-set with you while you have no pants on? It’s stressful!”

When talking to Women’s Health magazine, he talked about breakups, marriage and guys who are only out for one thing:

Your character Alcide goes through a tough breakup. What’s the best way to mend a broken heart?

Move on. People just keep bouncing off their exes and wasting each other’s time. If you go back, you’ll be dealing with the same stuff that drove you apart in the first place.

What’s the kindest way to dump someone?

In person. Especially in this day and age. People break up by text message and e-mail – it can be so impersonal. Yeah, it’s easier that way, but at the end of the day, it’s disrespectful. You have to keep your side of the street clean. There’s really no good way to do it, but try to be honest. Just say, ‘I need X, Y and Z, and I’m not getting it.’

Is it possible for exes to be friends?

No. I’m not friends with my exes. Once you’re a pickle, you can’t turn back into a cucumber. If I need to get a female’s opinion, I’ll ask my girlfriend.

Many guys go straight to the physical stuff in the beginning, but the longer he waits, the clearer it is that he likes you. You want to make sure the person is worth your time. If I like a woman, I slow it down.

Do men appreciate when a woman offers to pay on a date?

It’s very sweet and much appreciated if you offer to pay, but a real man won’t let you do it. Men are hunters by nature; we used to drag home dinner for the family to eat. I feel best when I’m taking care of my woman. I’m old-fashioned.

What makes a woman marriage material?

If she inspires you to take over the world and be a better man.

Nom nom nom nom. I can’t believe I get paid to talk about fawning all over this beautiful creature. Eat your hearts out!