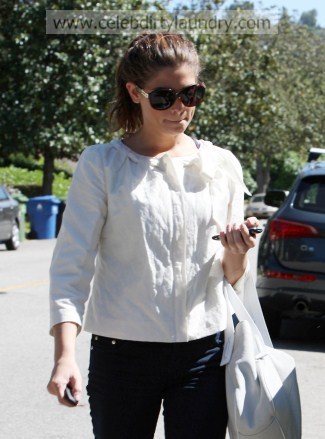 The ‘Twilight Saga’ actress is among a number of young stars offered roles in the fourth instalment of the cult horror franchise – with ‘Heroes’ leading lady Hayden Panettiere and Rory Culkin also set to appear.

The three stars will join Courteney Cox Arquette, her husband David Arquette and Neve Campbell who all reprise their roles from the previous three films in the Wes Craven-directed project.
However, the trio will have much smaller roles than in the previous movies as part of the decision to reinvent the 14-year-old franchise.

Ashley will play Jill, the cousin of Neve Campbell’s character Sidney, while Hayden will play her best friend, according to The Hollywood Reporter’s Heat Vision Blog.   Ashley is currently working on a number of new movies, including horror thriller ‘The Apparition’ with Tom Felton and comedy film ‘Butter’ alongside Olivia Wilde and Hugh Jackman.
‘Scream 4’ is due for release on April 15, 2011.  Photo: Fame Pictures