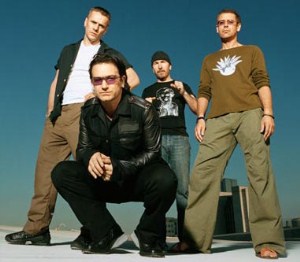 Irish rockers U2– who were recently forced to scrap a number of concerts after frontman Bono suffered a back injury – netted the staggering sum between July 2009 and June 2010 thanks to selling over 1.3 million tickets for their epic ‘360’ tour, boosting their earnings further with merchandise sales and strong radio play for their extensive back catalogue.

Although U2 were named the Top Earning Musicians of 2010, according to figures compiled by Forbes magazine, veteran rock group AC/DC came a close second, earning $114 million from a tour which grossed $226 million – $2.3 million per night.

Beyonce Knowles was named the highest earning female of the year, taking third place with a stash of $87 million, thanks to a world tour, sales from her House of Dereon fashion line and endorsement deals.   Beyonce’s husband Jay-Z also featured in the list, taking the sixth spot after raking in $63 million from record sales, a tour and his stakes in the New Jersey Nets basketball team, 40/40 nightclub chain and hit stage show ‘Fela!’.

He was beaten by Bruce Springsteen and Britney Spears, who amassed $70 million and $64 million respectively. Eccentric singer Lady Gaga was a new addition, featuring at number seven with $62 million earnings, thanks to CD and download sales, her ‘Monster’s Ball’ world tour and endorsement deals, narrowly beating her idol Madonna, who took eighth place with $58 million.   Country star Kenny Chesney landed at number nine after filling his bank with $50 million, while the final spot was tied between Black Eyed Peas, Coldplay and Toby Keith who all earned $48 million.