U2 The Highest Earning Act In The US Last Year 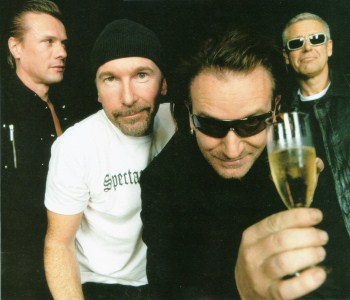 According to Billboard magazine’s Top 40 Money Makers list, the Irish rockers made $109 million in 2009 from touring, record sales and other royalties. The total was almost twice as much as second placed Bruce Springsteen.

The ‘Born in the USA’ singer, known as ‘The Boss’, took home $58 million, while Madonna came third, earning $47 million, just ahead of AC/DC, who banked $44 million.   Britney Spears rounded off the top five, raking in $38.8 million.   U2 are currently in the middle of a huge world tour, which Billboard say is the most lucrative for any artist.  Although the ‘360 Degree’ tour is the most expensive ever staged, the group are playing to much larger audiences because they are performing on the specially-designed ‘Claw’ stage, which is erected in the centre of venues.
The late Michael Jackson – who died last June – was the top earner from CD and ringtone royalties in 2009, but only made it to number 20 on the overall list because he tragically passed away without taking to the stage again.

The magazine’s formula for working out the Top 40 Money Makers is "top secret" but is based around money earned from all methods of selling music, along with publishing and touring monies.