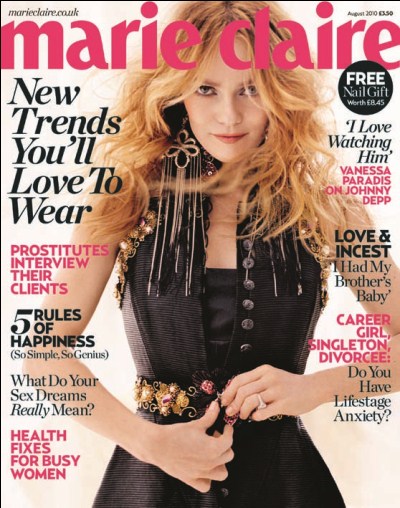 The beautiful Vanessa Paradis for Marie Claire UK Aug issue, she talks about Johnny Depp, how they have managed to stay together for over 10 years and how the fact being apart helps their relationship, she also goes on to speak about their kids and her and Johnny Depp working together.  Below is a glimpse of the interview in the August edition of Marie Claire UK.

Do you ever ask Johnny’s advice about a script?
When it comes to planning, yes. Otherwise, very rarely. In fact, we don’t really speak a lot about work when we’re together. We just try to organise ourselves so we can spend as much time as possible together.

Can I ask you about Johnny Depp? How do you keep the passion alive when you’ve been with the same man for 12 years?
First of all, you have to be lucky enough to find the right person. Next, the fact that we’re not together every day plays a big part in keeping our relationship stable. And then we also have a lot of respect and admiration for each other. We understand that, if we want our relationship to continue, we must give each other space, allow each other to go off on our own, and trust each other.
Not everyone is lucky enough to be given space and trust.   You’re really lucky if you find someone you can trust when you spend time apart. But it’s more complicated than that. Keeping love alive should be like the way you live your life: you don’t eat the same meal every day, you don’t read the same book, you don’t listen to the same CD. When you are a couple, you need to go off alone and discover things for yourself.

What do you most admire about Johnny?
I could make an endless list of all the things I admire about him, but above all I admire his immense loyalty. I love watching him when he’s thoughtful or involved in something. I love observing him when he is talking to people. I love seeing how he deals with situations… I could go on and on, tell you I admire him as an actor, as a father and as the man he is for me. But more than anything, I admire him as a person. Not only when he is talking to me or his mother, but as a person in the world, in all kinds of situations. I think he is magnificent. Truly magnificent. 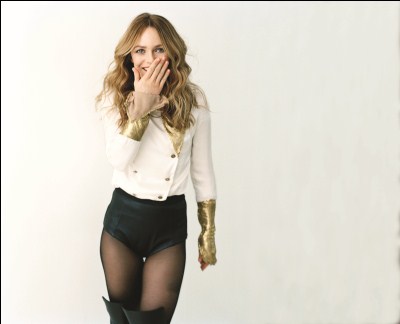 Vanessa Paradis on working with Johnny Depp and kids

Do you ever think you’ll make a film together?
A few years ago we were both going to be on the set of Terry Gilliam’s Don Quixote film but shooting stopped. Frankly, the thought of filming with him would scare me to death. It’s not that I don’t want to, but I would be frightened that I wouldn’t be up to his standard because he’s so talented. And I don’t know if I would be able to lie in front of him.

You didn’t have a normal adolescence. If one of your children wanted to follow in your footsteps, how would you react?
To sing and be in the public eye at 14 years old is not something everyone experiences. But do I now wish for the same thing for my children? I don’t know – I would need to think about it for a long time before I could give you an answer.