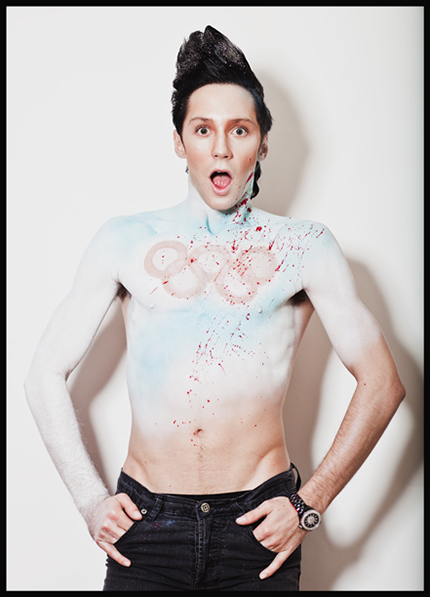 Vanity Fair invited a wide array of olympic athletes—both lesser-known lights and legends in the making—to share their moment of hard-earned glory.  Below is a glimpse of the interview with Olympic six place finisher, USA figure skater 25 year old Johnny Weir in Vogue portrait of the games.

“I wore a small tuft of fur on my costume at our Olympic qualification competition, and I started to hear lots of grumblings from anti-fur activists, and then the things people were saying slowly started to get more and more terrible and I started to get threatened, and ultimately a price was put on my head by an activist for anyone who wanted to hurt me.” Fur-get about it:  “The controversy has definitely died down since I’ve been here … I got standing ovations for both of my performances, and that’s a beautiful thing.   People can forget about whatever controversy is surrounding Johnny Weir and just focus on what I do.”

“I have the world championships in Italy, and then I’m going to take a vacation to Mongolia because I want to ride a yak. And after that, I’ll go to Moscow and see some friends, and after that I’m going to go lay on a beach for a little while, and then maybe continue skating, but if not, I want a career in fashion.”

To see more of the Vanity Fair Portraits go HERE.