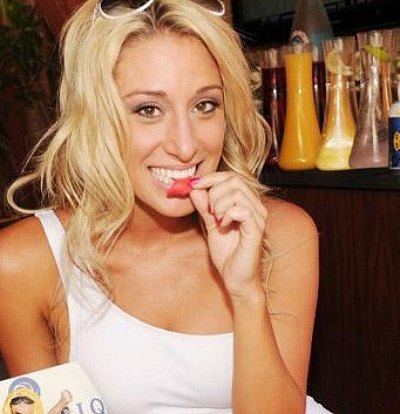 Vienna Girardi is only star because she won The Bachelor star, Jake Pavelka’s heart. That grew even more when she was dumped by him in the public spotlight. Apparently that wasn’t enough to get her into the finest clubs.

Sure, she’s being followed by the paparazzi, but it’s not of Britney Spears proportions or anything. People are curious about her since the epic falling out between the two of them, but she doesn’t generate front page tabloid coverage.

I guess it wasn’t enough to get her into the Audi & Chopard Emmys kickoff party yesterday at Cecconi’s in West Hollywood. She approached the bouncer, but was brutally rebuffed. She wasn’t on the list!

And instead of pulling a Dina Lohan with her “Don’t you know who I am?!??” tirades, she took it like a champ. While waiting for the valet to retrieve her car, she was approached by Kathy Griffin.

Kathy said, “I told that the After The Final Rose, or whatever that was, was riveting. I stand by my statement that it was riveting. And I said that it didn’t matter if public opinion went her way, I was on her side. However, I’m not willing to wear a ‘Team Vienna’ t-shirt or put on a warm-up suit, which she is in, or run a marathon on her behalf. However, it does appear that Jake would be a douche!”

I won’t run a marathon on her behalf either, but I agree, Jake does appear to be a douche. Still not enough for her to get in to party with the cool kids, though. Tsk, tsk. Time for a sex tape?