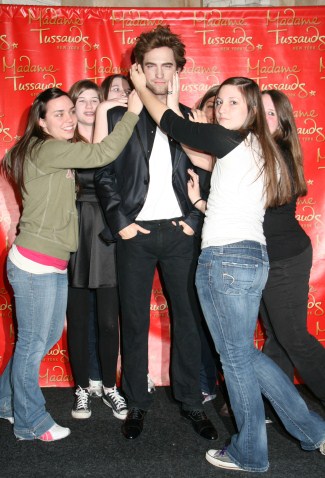 Robert Pattinson the ‘Remember Me’ actor has become the latest star to be immortalised with a lookalike at London’s Madame Tussauds, and some of his fans were invited to a VIP unveiling to meet the imitation this morning (25.03.10).   Robert fan Katie Sear said: “The figure looks really great! Just like him – his hair is spot on. It’s amazing, almost like meeting the real thing! I’m sure people are going to love it; he is just gorgeous.”

The waxwork has the trademark messy hair and narrow-eyed expression of the real Robert, and museum organisers are in no doubts that he will quickly become one of their hottest attractions.
Madame Tussauds’ spokesperson Liz Edwards said: “Pattinson is one of the hottest celebs on the planet. We are delighted to be able to give them the chance to cosy up with their idol here at Madame Tussauds and judging by the reactions of the first to meet him here this morning he is set to top our “most kissed list of celebrities very quickly!”