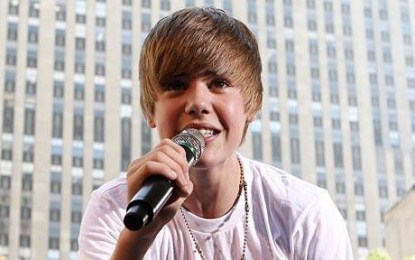 It looks like the “The Beebs” is letting fame go to his head.  Justin, 16, decided he wanted to learn how to play soccer – now does he behave like a normal 16 year old and go to the park with a bunch of boys and play?  No not “Diva” Justin Bieber he needs to get David Beckham to give him lesssons – holy crap this kid needs to come down to earth.  I see a Lindsay Lohan or Britney situation in his future.

The Beeds offered The Beckhams a private concert for their sons Brooklyn, 11, Romeo, seven, and Cruz, five  in exchange for some tuition in ball control.  He told The Sun newspaper:

“I am sure he would do anything to make his three boys happy and if I am their favourite artist I would happily come and put on a private show at the Beckham household.  “All I would ask for in return is that we go into his yard for an hour afterwards and he teaches me all those crazy things he can do with a soccer ball.”

As well as seeking help from David, Justin – who is mentored by Usher – recently revealed he would like lessons in love from Cheryl Cole and Katy Perry.  He said: “Maybe they could coach me and tell me how to work out which girls are the good ones. That would be pretty awesome. I would like to invite the two of them out for dinner so they can tell me the best way to win a woman like them.”

Justin’s ego seems to be out of control – soccer lessons from Beckham and lessons in love from Cheryl Cole & Katy Perry.  What’s next acting lesson from Brad Pitt?

To be fair what would we expect from The Biebs he is made to feel that he is the most important person of his age between the Beliebers and the people that surround him.  He is treated like he  is a more important person that the person who will cure cancer, or the future world leaders.   So I guess it makes sense that he act like he is the king of the world.  Just saying…