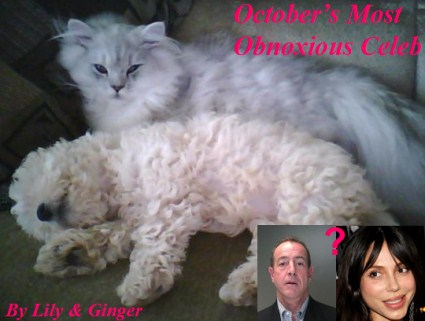 My Cat and Dog, Lilly and Ginger, were having a debate this morning over which celebrity was going to win the Most Obnoxious Celeb in October Award.  Lilly, a small white Persian, was whispering in my ear that Oksana Grigoreiva was a shoe-in based simply on the vast number of lies she has publicly told about everything from Mel Gibson, to her leaks to the press, to her big bad and ugly criminal bodyguard and life coach, Kistian Otto Herzog.   Lilly went on to purr that Oksana was really disgusting for expecting us out here in the public to believe that her insidiously recording Mel was anything other than a ploy to blackmail him and steal his money.  I was quite impressed with Lilly using a word like insidious.  I suppose her sneaking off with my thesaurus last week is paying off for the little puss.

Meanwhile Ginger the miniature poodle was none too pleased with Lilly’s comments and actually attempted to snap at her between growls of disapproval.  Ginger was of the opinion that no matter how much of a puffy-lipped botox shooting gold digger Oksana was, Michael Lohan is worse!  “He is not only after Lindsay’s money” said Ginger, “but he is a pathological liar who sold his daughter’s personal and private phone conversations which he taped.”  Additionally, the doggie thought that Michael’s very public swearing off of the media last week was bogus since the very next day he was ranting about a mysterious mugging he claimed occurred during which his throat was supposedly slashed by someone wanting to keep him away from Lindsay’s court appearance.  Who cares what Michael Lohan does, Ginger barked, he is nothing but a publicity seeking fraud.  Ginger’s point, with which we have to agree, is that even though both Oksana and Michael are the type of low down people who tape others without their consent and then use the tapes to profit themselves, Michael did it to his own daughter – his flesh and blood – his little girl – how could he?    Ginger thought that any dog who ratted on his own pup was not worth even a Milk Bone.

Both Lilly and Ginger were able to agree that Michael Lohan is really ugly and talentless, a total lowlife having been arrested and convicted previously of securities fraud, while at least Oksana looks okay and has a career of her own.  In the balance we award Michael Lohan Mr. Obnoxious October, 2010.   Now I have to take Ginger out for a walk – and don’t forget the pooper scooper…..

Article first published as Who Wins October’s Most Obnoxious Celeb? on Technorati.