Will We See Donald Trump As The Next President Of The USA! 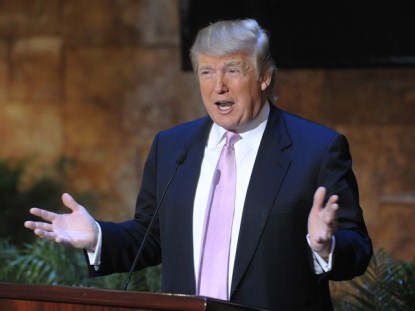 One of my favorite guys Donald Trump has been rumored to be thinking about running for president for several years.  Donald has put all the rumors to rest and has said YES he is considering running against Barack Obama for President in 2012.  Donald thinks it would be lots of fun and so do I.  If I was an American I would vote for him!  Just imagine him walking into the white house and saying “you’re fired” :-)

“I am thinking about things.  And I’m looking at this country, George, and what’s happened in terms of respect.  And the respect for this country is just not there,” he said. “I have many people from China that I do business with, they laugh at us.  They feel we’re fools.  And almost being led by fools.  And they can’t believe what they’re getting away with.   The United States is a “whipping post” right now and China is “getting away with murder” because it’s manipulating its currency, he said.  But he claims all of that would stop under a Trump Administration.  He would start by tackling the price of oil and taxing China — even though they are our bankers Trump insists we still have control.

Donald says he would run as a Republican and would not rule out financing his own campaign.    I can only imagine the fun with Donald and Sarah Palin fighting for the Republican nomination.