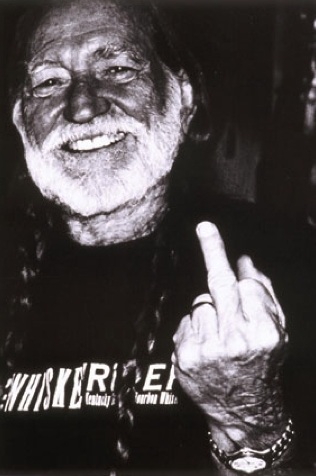 Country singer Willie Nelson, 77, was arrested today in  Sierra Blanca, Texas and charged with procession of  six ounces of  marijuana.  The bus pulled into a check point in Texas and the officer Bill Brooks says when the door opened he smelled marijuana.  Three other people were arrested along with Willie.  Willie was held on a $2,500 bond and was later released.

Radaronline reports – It’s not Nelson’s first run in with the law; Louisiana authorities searched Nelson’s tour bus back in 2006 and found about a pound-and-a-half of marijuana and mushrooms.

I cannot imagine that anyone is surprised by this – good to know this dangerous man ;-) was off the street for a while.  Seriously, he is 77 years old and does  not bother anyone – what a waste of the tax payers money!