Woody Allen is “Not A Crazy” He Just Acts That Way 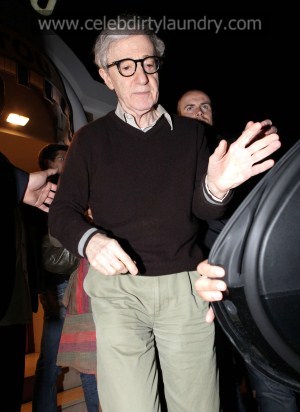 The 74-year-old screenwriter and film director Wood Allen – who has been romantically involved with his former step daughter Soon-Yi Previn since she was 22 and he 56 – said he is a “fairly solid citizen”.   He explained: “I’ve had therapy but not an ungodly amount. I exaggerate it for laughs. I’ve been productive all my life. I’ve been married now for 13 years.   “I’ve been a fairly solid citizen. I’m not a crazy.”

However, the ‘Vicky Cristina Barcelona’ filmmaker – who recently finished shooting ‘You Will Meet a Tall Dark Stranger’ in London – admitted ageing is something which worries him.   He said: “Ageing, death: these things intrude upon you. When you get out of bed you find, ‘Oh God my back hurts and ‘Oh God I’ve got a pain in the back of my neck’.   “You start to feel your age: it finds you. You’re aware of death your whole life, constantly sweeping it under the rug and eventually it happens – you just have to hope as painlessly as possible.”

Allen went on to add he regrets the fact that he hasn’t achieved “what he hoped to”.   He told the Times newspaper: “I have a very poor record given the opportunities I have. You reach a certain age and you come to the conclusion that greatness is not in you.   “The years go by and you realise: ‘I’m this mid-level guy’. I did the best I could. It’s not hard to accept. I didn’t compromise or sell out, but I’ve never achieved what I hoped to.”