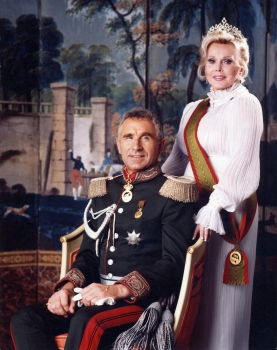 The 93-year-old actress’ spouse Prince Frederic von Anhalt has been confined to the bed next to his ailing wife after blacking out and collapsing at their Beverly Hills home last night (18.08.10).    A representative for the couple told website TMZ:  “He was doing stuff around the house when he felt dizzy and fell.”

One of the nurses assisting Zsa Zsa saw Prince fall and called a doctor.  The representative added: “Prince is suffering from exhaustion and is not able to use his arm right now. It’s really bruised up.”    As well as Prince being bed ridden, Zsa Zsa is also in a bad way and is spending most of her time sleeping.   The spokesperson said: “She’s still bed ridden but is eating a little, talking a little and sleeping a lot.”  Earlier this week, it was revealed Zsa Zsa had gone home for her final days after being given her last rites in hospital at her own request.

Hungarian-born Zsa Zsa had complications following a fall out of her bed in June while watching TV show ‘Jeopardy’.  She was taken to hospital to undergo hip replacement surgery and was believed to be getting better, but had to be readmitted when doctors discovered blood clots – one of which was close to her heart.  The nine-times wed actress’ health has been deteriorating for many years – in 2002 she was partially paralysed following a car accident and has needed to use a wheelchair since.