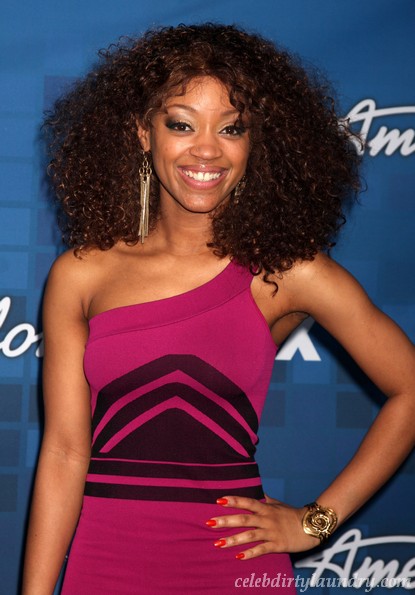 Thursday night’s American Idol Results show was relatively uneventful; but, just in case you were one of the unfortunate souls who missed it, here’s a quick play-by-play to keep you up to speed with the planet’s biggest singing competition…

Casey Abrams got sick (crowd=sad) and couldn’t make it to the taping of the results show. “Everyone wave to Casey in the hospital,” Ryan Seacrest said. Oh, Ryan, you silly goose.

Contestants finally moved into the ridiculously large American Idol mansion where, of course, praising the heavens, jumping on beds, and loud singing commenced.

Seacrest found Amanda Seyfried in the audience and drilled her with questions about her new movie Red Riding Hood. “Yeah. Totally. Like, amazing. The best time of my life. Doing the movie was like, honestly, the BEST time of my life,” she commented. So it wasn’t Mamma Mia?

We saw a clip of our favorite Idols watching the premiere. They all looked a little too terrified while watching. Let’s hope that’s a testament to the big scary wolf and not the acting.

Jacob Lusk and Stefano Langone were both safe. Poor Karen Rodriguez, our favorite bilingual songstress, not so lucky. Sad face. Bottom three.There was a brief intermission performance from ex-Idol, and relatively tame, Adam Lambert to relax the nerves.

Lauren sang “Any Man of Mine” by Shania Twain the previous night. After admitting that her performance sucked (and putting on the teary eyes, etc. etc.), Seacrest told her she was still in the running.

Our next hot-seated girl, Ashthon, admitted she needed to pick better songs. And then there was Hayley who definitely didn’t admit her failure. She wanted to fight Randy Jackson after he told her “. . .the whole thing just didn’t quite work.” She quickly whipped out her Oh no you didn’t just say that face. Ashthon was the next person to find herself in danger. Hayley thought she was home free until Ryan said she was the third contestant in the bottom three. Casey, our hospital-bound friend, and everyone else sitting on the couches, was safe. Phew.

Aw, snap, a performance from Diddy Dirty Money! Quite good and energetic.

Commercials+Dimmed Lights+Drama+Suspense+Seacrest’s “JUST TELL ME ALREADY!” voice resulted in Karen’s safety. Hayley was also safe. That left Ashthon to get the boot.

The judges were unanimous in choosing not to use the powerful “Save” power. Farewell, Ms. Jones, you sang well.