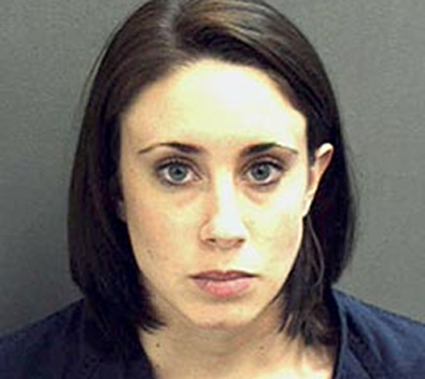 We can only hope that its not true but National Enquirer is reporting that accused murderer and monster mom Casey Anthony says she is pregnant.   America’s most hated mom told her pals in jail that she is pregnant – while on trial for the brutal slaying of her 2-year-old daugh­ter Caylee.

In a surprise new twist in the case in­siders at Orlando’s Orange County Jail say the hard-partying 25-year-old claims she’s having a baby in the belief that that may save her from the death penalty.  If you can believe it, Casey claims a new child will help heal the hole left in her heart by Caylee’s death.

“The creepy thing is how Casey wants another sweet little girl to make up for dear Caylee,” says a prison insider. “She’s making a big deal about being a few weeks pregnant, but only among a few people close to her in the jailhouse.”

“She still isn’t show­ing, but she says the pregnancy is in the very early stages and is hoping to start showing soon so the people in the courtroom will notice.”

Is Suri Cruise Missing Out On Childhood?

“Months ago, Casey told her jail­house friends that she wanted to get pregnant and recently said she missed her period. Then she said she was starting to get feelings in her body that reminded her of when she was in the early stages of carrying Caylee. Soon after missing her period, Casey started getting sick, throwing up in the morning. She said that all this convinced her she was pregnant.”

While it wasn’t easy, Casey told pals she found opportunities to have sex with a man while behind bars, say sources.

“Casey could be lying about being pregnant just to get atten­tion,” explained the insider. “It is her nature, and her motive would be to play an emotional card with the jury, which might feel sorry enough not to condemn her to death.”

“Her few confidants inside the prison don’t know what to make of her incred­ible claim,” said the insider.

“Is it another Casey fantasy or is it true? Only time will tell.”

And who would be the lucky dad?