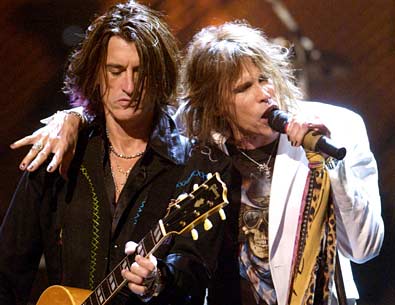 Aerosmith star Steven Tyler insists that just because the band is supposed to get together this weekend to record new material doesn’t mean things are harmonious in the group – he’s still not speaking with guitarist Joe Perry, who he does not expect to show up at the recording session.

Tyler and the guitarist fell out at the end of 2009 when the singer quit the group to concentrate on a solo career before checking into rehab to tackle a recurring drug habit, prompted by a battle with hepatitis C and the break-up of his marriage.  Perry publicly blasted Tyler and made plans to work on new Aerosmith material and concert commitments without Steve.  Steve rejoined the group last year for a series of U.S. and international dates but then he and Perry fell out again when he signed up as a judge on TV talent show American Idol – a decision a sarcastic Perry called “one step above Ninja Turtles”.

As if what Aerosmith does is really important and top flight entertainment – sounds like Perry is just jealous and bitter.  When the singer announced Aerosmith would be returning to the studio at the end of the week, fans felt the two warring bandmates had settled their differences, but, in a chat with radio presenter Howard Stern on Tuesday, Tyler revealed he hasn’t been able to contact Perry for weeks, and doubts he’ll be part of the latest group reunion.

Steve said, “(We last spoke) a long time ago, on tour. I think he’s bummed out I’m sober. Joe is missing in action. I texted him 20 minutes ago: ‘Hey Joe, where are you?’ He’s angry with me for what? Because I took f**king Idol? What a crock of s**t.”

Frankly, Aerosmith’s best work is years behind them – they are riding their name now for more income – that’s it.  Steve Tyler belongs on American Idol – there he can contribute a reasonable level of entertainment.