BY Roberta Ferguson on May 25, 2011 | Comments: one comment
Related : Alexander Skarsgard 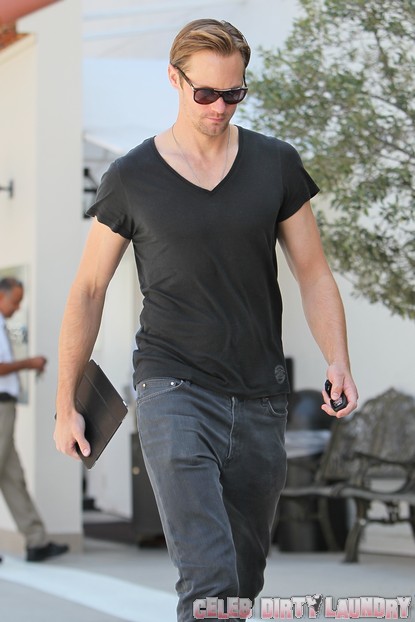 When the vampire sheriff of area five, Eric Northman, goes for a nice stroll, you sit up and take notice!

I couldn’t pay attention to the context of these photos, but we’re sure he had a destination…somewhere. Truthfully, whenever there’s an opportunity to talk about Alexander Skarsgard and nudity in the same sentence, we’re not too far behind (gawking, of course).

After reading book four, I’ve found that Eric just might be in the buff a lot this coming season. We’re not complaining, it’s just the opposite. In fact, Alex says that he doesn’t mind it all.

In a new interview, he said, “No, I don’t really care about that stuff, if it makes sense in the script.” If you’re curious if he gets “excited”, he said, “You don’t get turned on. It’s such a technical environment. They make it look sexy, but it’s definitely not. You have a sound guy five inches away from you, a camera in your face. It’s not a sensual moment.”

Who else can’t wait to see the fake sensual moments as Eric and Sookie hook up this season?