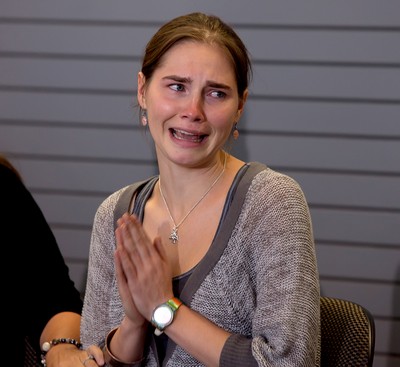 Recently freed Amanda Knox, the co-ed killer, has her first offer to get involved in pornography and not surprisingly it comes form the same bottom feeder who was first in line to make Casey Anthony a similar offer.

Yes, you guessed it, Steve Hirsch of Vivid Entertainment has reached out to the recently acquitted, but still totally guilty in my own and many people’s minds, Amanda.

TMZ has reported that Steve Hirsch said: “We would like to offer her the opportunity to be our vivid.com spokesperson and represent the studio at trade and retail events.”

Steve added: “This would involve no nudity or sex. Of course we would welcome talking to her if she wants pursue this direction, but the decision is totally hers to express.”

Continuing: “We were ready to make an offer to Casey to star in one of our feature films. It’s clear to me now, however, that there has been an overwhelmingly negative response to our offer and so we’ve decided to withdraw it.”

So here it is folks: do the most dastardly vile crime imaginable – get out of jail somehow – and Steve Hirsch will be there with a great job offer.