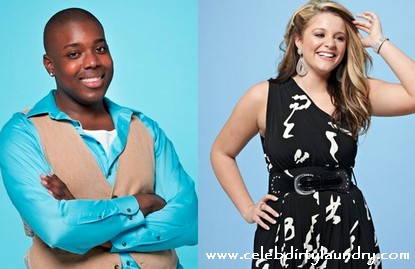 Our guest blogger, Rosie, from Fit Fab Celeb, provides us with a recap of tonight’s episode of American Idol.  It’s time once again to dim the lights, Ryan Seacrest will reveal the results of your votes. Everyone, except for Jacob Lusk, brought it home last night – it will be interesting to see what happens. Three weeks to go in the competition, there is no room for coasters.

Tonight, Jennifer Lopez will be performing On the Floor with Pitbull. Let’s hope her singing is better than her sense of style lately. In the past week she’s had a series of fashion faux pas including a gold sequined jumpsuit and harem pants.

Here’s your recap:    60 million votes, the highest of the season!   Seacrest starts the show with 1. a plug of  Steven Tyler‘s new self entitled memoir 2. Jennifer Lopez’s performing later in the evening 3. Randy Jackson has nothing to self promote, Randy jokes that he is having a bake sale this weekend!

Lady Antebellum perform the premiere of their new single, Just a Kiss,  which they just finished up in the studio last week. The trio have been working really hard on their third record, the follow-up to Need You Now.

JLo is up next and I wish I had something good to say about her performance, but I don’t. Sorry – it did nothing for me and if that wasn’t enough, they showed her music video for I’m Into you, I swear – can we just get on with the show?

Finally, we dim lights again. Jacob Lusk is next and Seacrest asks him to join Lauren. Haley Reinhart is next and she is asked to join James – we now have two on either side of the stage.   Our last hopeful, Scotty McCreery who has never been in the bottom two, is safe again and so is James and Haley.