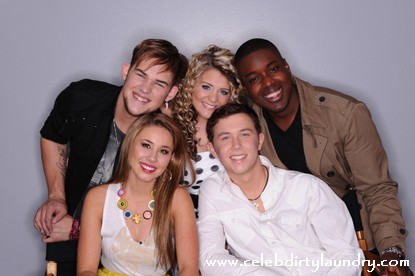 Our guest blogger, Rosie, from Fit Fab Celeb, provides us with a recap of tonight’s episode of American Idol.   It’s getting down to the serious stuff, only five hopefuls left. Tonight the theme is Now and Then. Each of the remaining singers will perform one modern song and one from the 1960?s. There’s no room left for being pitchy or mistakes of any kind, they better belt it out tonight and make it count!   On to tonight’s recap:

James Durbin – Closer to the Edge by 30 Seconds to Mars – Tyler said he kicked the songs ass. Lopez said he came out a grabbed it. Jackson said he fit well with the song – he’s in it to win it.

Jacob Lusk – No Air by Jordin Sparks – Lopez said his voice is the best that’s ever been on the stage but she is struggling with the songs that he chooses. Jackson said he has a different opinion, he doesn’t think this direction, for him it was a little corny – he should be the new Luther Vandross not Chris Brown. Tyler said he loves his voice but he’s waiting for the certain something.

Lauren Alaina – Flat on the Floor by Carrie Underwood – Jackson said this is the direction she has to go in, amazing. Tyler said it is as good as it gets, the sky is the limit. Lopez said she ate it up – just like that, everytime.

Scotty McCreery – Gone by Montgomery Gentry – Tyler said he seen him dance with the devil tonight, it was really beautiful. Lopes said she lost it, she was so excited – American Idol stuff right there! Jackson felt like he was in a concert, he’s in it to win it too!

Haley Reinhart – You and I by Lady Gaga – Lopez said she had good moments but she is not sure if this was the right song for her. Jackson said he is not sure if it that great of a song, it was too risky – but it didn’t do her any favors. Tyler felt she put all her range in it, but again he didn’t like the song choice.

James Durbin – Without You by Harry Nilsson – (James is crying, me too) Jackson said this is a mark of a truly great performer – it was emotionally perfect. Tyler said it was a beautiful thing, he loved it. Lopez said he has a heart and soul to back up his voice.

Jacob Lusk – Love Hurts by Nazareth – Tyler loved it, he hopes we could feel it at home. Lopez said he brought it home at the end. Jackson said it was great, the highest note ever sung on the stage.

Lauren Alaina – Unchained Melody by The Righteous Brothers – Lopez said there was nothing to judge, it was just beautiful. Jackson said she sings like a bird, very nicely done. Tyler said her voice was so there, loved it, he could listen to her all night.

Scotty McCreery – Always On My Mind by Elvis Presley – Lopez said he showed them what a well rounded artist he is, captivating and amazing. Jackson said he is their youngest veteran, if it ain’t broke, don’t fix it.

Haley Reinhart – House of the Rising Sun – Jackson said that this is what he loves about the show, the award for best performance of the night goes to Haley! Tyler said sweet and sour, raspy, he can relate to that. Lopez didn’t know if she was angry at them, but the song has never been sung like that before.

The clear winner tonight is James Durbin, the guy is more than slammin’, I would buy his album right now! The loser is Jacob Lusk, please send him back to singing in the church and put me out of my misery.

Stay tuned tomorrow night when we will find out who has the least votes and is packing their bags.