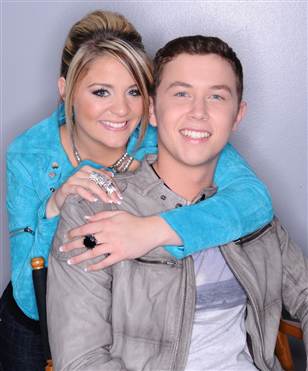 Welcome to our American Idol the final two recap.  Tonight Scotty McCreery and Lauren Alaina the  finalists will take to the stage and to sing three songs each — one their favorite from this season, another chosen by “Idol” producers and the third picked by one of their personal music idols.  Those heroes are rumored to be Country Music Hall of Famer George Strait for Scotty and season four “Idol” champ Carrie Underwood for Lauren.

If you missed the show last week, catch our recap over HERE.  So who will win tonight?  It is down to the wire – one young country star against another.  Odd makers on gambling sites are giving the win to Scotty but at the end of the day the fate of the contestants is in the hands of “American Idol” voters, who this season have proven highly unpredictable.  The final show’s recap is being brought to you by Rosie over at Fit Fab Celeb.  Take it away Rosie!

After a coin toss, Scott McCreery is up first and his favorite song is Gone. Up next is Lauren Alaina singing her favorite, Flat On The Floor.

Scotty McCreery is up again for his Country Star’s Pick, and George Strait chooses Check Yes or No. Scotty gives a flawless performance, he slammed it! Lauren Alaina is up net for her Country Star’s Pick, Carrie Underwood choosesMaybe It Was Memphis. Loved Lauren’s dress – she rocked a gold strapless gold short dress with cowboy boots, vocally it was a miss.

Randy : “American did a fine job, but it is so hard tonight – they are both incredible. Scotty’s Gone was amazing and the George Straight song was fantastic.  Round 1 slight edge to Scotty, round 2 slight edge to alaina.

Lopez: “I found it was an explosive start, loved Gone – then Lauren came out and slammed it. Same results as Randy – but very tight race”

Tyler: “I would give up first round and second to Lauren because she is prettier than Scotty”

Scotty performs the single that will be released if he wins, I Love You This Big. Jackson: Your’re in it to win it, it’s game time, awesome vocals. Lopez: An amazing job, you are a great story teller. Tyler: You took your chances and you nailed it again.

Lauren performs the single that will be released if she wins, Like My Mother Does. Jackson: An amazing song for Lauren, a great ode to your mom, Lauren Alaina has arrived! Lopez: It is a really tight race, but with this song Lauren may just have won. Tyler: First time I saw you, you were my American Idol, the rest of America will too.

Either Scotty McCreery or Lauren Alaina will emerge victorious and it will all be up to you. Stay tuned tomorrow night for the final show when the winner will be announced.