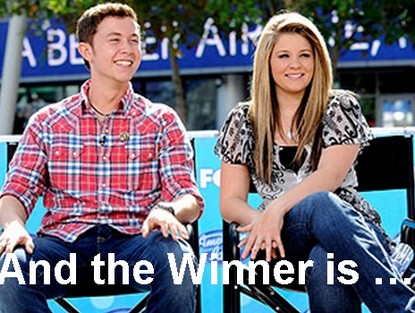 The results are in and tonight we will know who won American Idol, Lauren Alaina or Scotty McCreery.  If you missed last night’s performance you can catch our recap HERE.  Last night both contestants  gave amazing performances and we ran a poll today to see who our readers though would be the winner and Scotty is the favorite with over 60% of the votes.  Still, it’s really anyone’s guess as to who will be crowned the winner of American Idol tonight!

There are many surprises expected for the finale tonight with rumored performances by U2’s Bono and The Edge performing with cast-members from the troubled Broadway musical “Spider-Man: Turn Off the Dark,” Beyoncé and Lady Gaga are also expected to take the stage.  So put your seatbelt on, lean back and enjoy our live recap of the finale of American Idol brought to you by Rosie over at Fit Fab Celeb and find out who will be crowned the new American Idol champ!

Tonight is going to be a long road of entertainment before we find out who is the 2011 American Idol, after 122 million votes, here we go. We will list the performances in order of appearance. (Scotty comes out on stage and there is a standing ovation)

– One of my favorites, James Durbin, performs with Judas Priest and rocks out the Idol stage.

– Casey Abrams and Jack Black perform a hilarious routine – my eyes were fixed on Jack, love him. With Jack Black and Gladys Night in the same arena I was hoping Robert Downey Jr and Ben Stiller would show up for a dose of Midnight Train to Georgia.

– The ladies perform a medly of Beyoncé’s songs and all of a sudden the diva herself appears on stage looking hot and fabulous and performs One Plus One.

– Haley Reinhart performs with Tony Bennett for a duet.

– TLC with L’il Jon (woot woot – a little Celebrity Apprentice in the house) perform with the top 13 girls – the crowd is up out of their seats.

– Scotty McCreery performs with Tim McGraw, Live Like You Are Dying – OMG, I am going to faint. Scotty melted my heart tonight, he was so freaking amazing that I am at a lost for words –  but I’m singing along, clapping and swaying back and forth, love it.

– Marc Anthony, a.k.a. Mr. JLo, performs a Latin number with his wife that is so self indulging, it is boring. Yawn.

– Top 13 guys are back on stage dressed in black singing …. amongst other things, Pussycat Pussycat! ok, where is Tom Jones? Oh, there he is, damn that man has aged well.

Lauren and Scotty surprise their favorite teacher’s with a Ford Focus each and then Ryan Seacrest in turn surprises the two finalists with any Ford vehicle of their choice! Wow.

– Beyoncé is back performing by herself this time, singing Make Love To Me. I don’t know about you, but having  Beyoncé repeatedly demanding me to make love to her is kind of creeping me out!

– U2’s Bono and The Edge performing with cast-members from the troubled Broadway musical “Spider-Man: Turn Off the Dark.

– Steven Tyler closes out the performances with a solo of Dream On.

Fit Fab Celeb POLL RESULTS – DID Lopez and Tyler give Lauren an unfair lead in tonight’s vote? 81 % said YES and 19 % said NO . 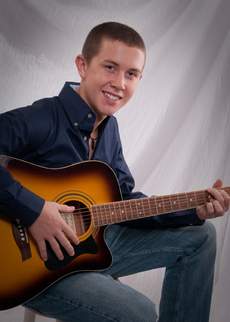