BY Rosie Leblanc on May 11, 2011 | Comments: one comment
Related : Amercian Idol 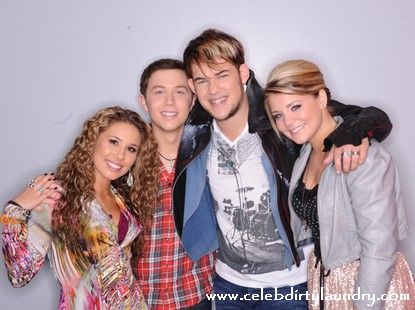 This week’s American Idol post is brought to you by Rosie from Fit Fab Celeb.  Take it away Rosie …

The top 4 perform tonight, in case you missed last weeks top 5 perform, you can catch the recap here and for the elimination episode to see Jabob Lusk give the boot click here.

Idol is taking us back to the 50’s tonight, one round will be inspirational choices and the second set of songs will be the oldies from Leiber and Stoller.  Lady Gaga takes over the show Wednesday night as guest mentor joining season-long mentor, music producer, Jimmy Lovine.

James Durbin – Don’t Stop Believin’  by Journey– Tyler loved it, nice going. Lopez said it was great hearing him go to his upper register, really great job. Jackson said it was great, the highest degree of difficulty and he did it.

Haley Reinhart – Earth Song by Michael Jackson – Lopez said that she felt the song inspired Haley although James raised the bar and she needs to start doing the same thing. Jackson said Lopez was right, it was confusing, the song didn’t fit her or suit her. Tyler disagreed with Jackson and Lopez, he loved it – wtf?

Scotty McCreery – Where Were You When the World Stopped Turning by Alan Jackson – Jackson said it was an amazing song, perfect song choice and he set his mark on the stage, he is set for super stardom. Tyler said he loved the passion, it was beautiful. Lopez said she is in love with him.

Lauren Alaina – Walk Away by Martina McBride – Tyler said she did again, she broke his heart with her pure voice – she’s the whole package. Lopez said it was very good, exactly what she has to do. Jackson said he was a little worried last week, but Lauren is back in it to win it.

Haley Reinhart – I Who Have Nothing by Ben E. King – Lopez said she was amazing, one of the best performances of the year. Jackson said she came back and had a moment right here that put her in it to win it. Tyler said it was a classic moment with classic Haley.

James Durbin – Love Potion No. 9 by The Searchers – Lopez said that showed her he could sing anything, it was a really great performance. Jackson said he slayed it, doesn’t matter what song it is, he’s peaking at the right time. Tyler said “my, my, my where you’ve come from and where you are, it’s a beautiful thing”.

Scotty McCreery – Young Blood by The Coasters – Jackson loved that he had such a good time – he is like a seasoned professional. Tyler said “You made Gaga’s yaya go lala” – a little Pat Boone, he loved it. Lopez said it was really great, he really hit his stride.

Lauren Alaina – Trouble by Elvis – Tyler said he just loves her. Lopez said there was a quality there that she hasn’t seen before, serious good performance, she loved the maturity. Jackson said it was out of her pop-country kind of thing, but she worked it.

Come back tomorrow night to find out who will be in the top 3 and one step closer to winning American Idol! My vote is to send Haley home, she bombed tonight and deserves the boot, what do you think?