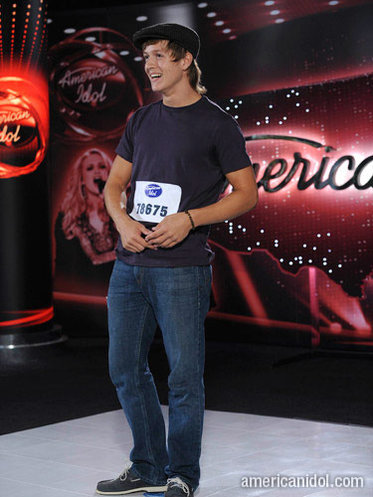 American Idol singer Alex Lambert reached the top 16 finalists last year and has been living the hard life in LA ever since – or so his story goes.

Alex tweeted that he’s been homeless and sleeping in alleyways and is in need of help.  Since when do the homeless and helpless tweet their discontent?

Season 9 American Idol alumnus Alex Lambert announced, via a string of posts to his Twitter feed, that he’s been living on the streets since he finished appearing on Simon Fuller’s Hulu reality series ‘If I Can Dream’, which wrapped its first season in October.   “Alright so I didn’t want to bring my person life to my fans but I’m about to freak out if I don’t tell yall the truth!” Lambert tweeted. “Ever since IICD ended I’ve been kinda homeless! Sleepin on the street and behind buildings.” A string of other tweets followed, where Lambert said that he’s “usually a strong person but I can’t take it anymore.” He continued: “I just want my fans to know that I’m not an American Idol type person!” And he finished by saying, “I just want y’all to know the truth!”

American Idol reps have been quick to point out that Alex isn’t homeless and that he gets paid every month.

A spokesperson for 19 Entertainment, an Idol production company that manages many of the show’s contestants, confirmed to that Lambert did tweet those messages. But the rep also claimed: “He’s not homeless. I don’t know where that came from.”

The spokesperson added evidence that Lambert, who’s on a development deal with 19, should have the means to pay for housing: “He’s on a retainer, and he’s getting money every month. He’s working on demos. He’s with writers, he’s working on music.”   Then the rep added: “He’s not homeless. How could he be texting? How could he be going into recording studio and sleeping on the streets? There’s no record deal yet, but hopefully with these demos something could come from that.”

Obviously the Idol people got to Lambert and made it clear that he better straighten things out before he REALLY becomes homeless… and less than 15 hours after the original ‘homeless’ tweets appeared, Lambert backtracked big time.

In a new bunch of tweets that hit Lambert’s feed, the singer backtracked saying there was a “miscommunication,” although he did admit to “crashin behind buildings and sleepin behind buildings.”  He added, over multiple tweets: “I’m a grown ass man. I’ve had so much help out here in LA! I just want to do things on my own! I have places to stay I just don’t want to be a burden on anyone! I have money! A nd soon I will have a place to stay! I just wanted to let y’all know! I’m not some rich spoiled kid!  That I’ve had to hustle and grind and I don’t mind sleepin on the street as long as I get my chance! Because I will not take it for granted! I hope y’all understand. Sorry for the miscommunication. I’m just fine!”

A top 16 finisher on American Idol who winds up homeless is either a druggie or very unusual.  The opportunities that are open for a contestant on that show assure that anyone who cares can get work and keep a roof over their head.  Alex Lambert is making a living – how dare he pretend to be homeless and thereby seek our sympathy.  What a bum.