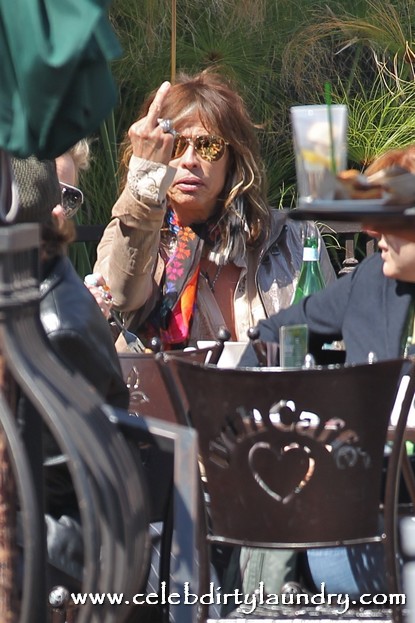 Amrican Idol’s Steven Tyler eating lunch at Urth Caffe with friends in Los Angeles, California March 8th, 2011.   Watching him on Idol I forget he is a rock star :-)  Steven took exception to the paparazzi snapping photographs at him during his lunch so he ‘flipped the bird’ at them.

Meanwhile Steve was totally bummed when Pia Toscano was sent home Thursday night on American Idol.  He said, “How could anybody vote her off when she sings like an angel.  But, it’s America and they get the final vote. I just love her. Out of all the singer’s I thought she just sang the best…for me.”

He goes on to say, “It’s American Musical Chairs up there.I know that she’s going to go on beyond what anybody expects.”

Regardless of Pia being eliminated, Steven has breathed new life into American Idol.  A show that was once boring is actually entertaining to watch and Idol can thank Steven for that!