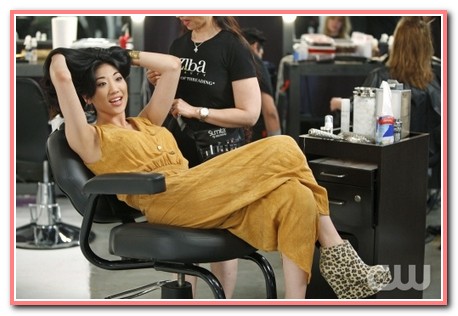 This week is the second episode of America’s Next Top Model.  This week is make-over week and Singer Ashlee Simpson joins the panel as the guest judge.  Last week’s shocking elimination has the girls stepping up their game.

This week is the second episode of America’s Next Top Model.  This week is make-over week and Singer Ashlee Simpson joins the panel as the guest judge.  Last week’s shocking elimination of Brittney, 29, from Florida has the girls stepping up their game.

The girls are in the limo and they are reviewing the prizes.  They think the prizes are amazing.  All the girls want to win.

Alexandria is upset because at the last competition some of the people booed her.  Sheena is moaning because it is difficult for Asia models and she does not really fit the mold.

Tyra shows up at the house and the girls are playing dress up.   Martin Lindstom is with Tyra and he is a brand genius and he works with Tyra.   Martin will help them take the 15 minutes of fame they had and help them get more.  He is going to teach them about branding.  He tells the girls that they took a poll and people gave a one word that described them.    He basically tears them apart and tells them everything they think is wrong.  Each girl was given one word.

The girls go to the studio for a photoshoot.   The photo shoot today will let them feel like a true celebrity  Miss J Alexander is there and Ashley Simpson she is there to help oversee the makeovers (ty-overs)and to talk to the girls about their brand.  Mr. Jay tells the girls they are going big this session.

The exact same thing happen every season, some girls accept the makeovers and others have meltdowns.

Bre gets so upset she walks off the set and she is threatening to go home.  She hates her haircut because they cut her hair so short and she feels she has lost her confidence.

Jay comes in the room and tells them it is lunchtime.  He has pizza hotdogs from Pink.  They are the hotdogs to the star.  The girls are going to create their own pink hotdog incorporating their brand.  The winner of the photoshoot will be featured on Pink’s website.

Laura – Loveable – Jay thought she really sold it.  The judges think the picture is more than loveable.  They love her face.

Camille – Proud – Jay thinks she looks tense, and he has Laura show her how to do it.   The judges feel it may be a bit pageanty.

Angelea – Persistence – Jay thinks she is so refined and beautiful and she is blowing his socks off.  The judges love it!

Bianca – Candid –   Jay says she is the biggest surprise of the day!  The judges love the photo.

Dominique – Survivor – the judges are not sure they see survivor.  Ashlee likes the picture.

Allison – Unique – Ashlee thinks she is a doll.   Tyra wants her to make sure she is not too cute.

Sheena Unexpected – had a hard time, they don’t feel the pictures is exciting enough.  They think she has more flavor than this picture.   They feel she is uninspiring.

Alexandria  – Tough gorgeous – they give her A+.

Isis – Inspirational – They don’t feel the picture is very inspiring.    Tyra likes it.  The rest of the judges feel it is over reaching.

Kayla – free – having a hard time too cheesy, she does not know what to do.  They feel the picture is a bit posy.  It is not free.  She is capable of so much more.

Bre – Girlfriend – she became soft and weak.  There is no sparkle in her eye.  They are concerned about how she represents herself.

Runner up for best photo – BIANCA