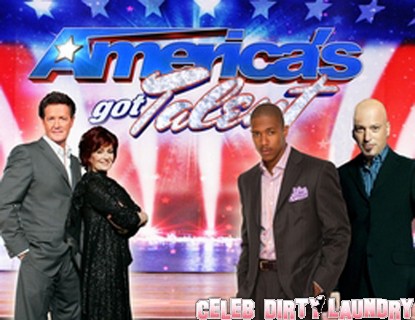 It’s time for America to break out their talents and display them on the America’s Got Talent stage! Funnyman, Nick Cannon returns to host the sixth season with judges Howie Mandel who will provide the laughs, Sharon Osbourne the love, and of course, Piers Morgan will provide his very own special criticism (I still miss The Hoff).   Last season brought us Jackie Evancho, Michael Grimm, Prince Poppycock and Fighting Gravity – I can’t wait to see what this season will bring. The winner, chosen by viewers, will have the opportunity to headline a showcase Las Vegas act and One Million Dollars!

Our recap tonight is being brought to us by Rosie over at Fit Fab Celeb.  Here we go, America’s Got Talent Season Six, let’s git it started:  Up first are the Los Angeles additions and the first act is 50 year old Frank Olivier who will juggle three torches while riding a unicycle and asks Howie to light them and pass them to once he gets going. Howie helps him out but not without being frightened of the flames and having Olivier touch his bald head to balance himself. Olivier does it, but his assistant Howie presses the buzzer.   Piers tells Olivier that because he terrified the life out of Howie, it’s a yes and Sharon also gives a yes. Olivier is going to Vegas – although my guess is that he won’t make it far.

Up next is 34-year old Ryan Andreas behind the piano singing In The Arms Of An Angel. No buzzers go off, that’s a good sign! Howie said the timber of his voice and the sound blew him away. Pierce said it was very impressive. Sharon asked how many times he performs in a month to an audience and Ryan says never. Howie, Piers and Sharon vote for him to go to Vegas. Good choice, he will go far – I would watch this one he will be a strong contender.

54-year old John Jacobson is a Music Teacher and he’s going to get America off the couch with his performance.  Double Dream Hands Dance to Planet Rock. Yikes, he is terrible. No rhythm and stiff like a toothpick. Three X buzzers and Piece tells him if the show was about Americas Got Annoying Teachers, then he would have made it.

The show goes on to show us other acts that received the golden Three X Buzzers; a girl screaming her head off, a guy who falls off his horse, a guy who imitates the judges farts, thank goodness they threw them out!

26-year old magician, Landon Swank. Ok, he folds up a girl inside a box and makes her disappear. Howie said it was amazing. Pierce liked it, called it slick and noticed the ladies like it. Sharon found it smooth, she loved it.  All three give a yes, Landon is off to Vegas.

Also going to Vegas are Brennan Figari who posed on the ariel silks and Olivia Bellafonte who performed Burlesque style.  61-year old, Debbie Obarka and her 20-year old parrot Danny who does animal impressions and interacts with Debbie. Pierce said Danny is the most intelligent animal he has every said. Sharon asked if Danny can do anything else and Debbie says he reads minds. Howie is concerned that this it the best that Danny can do.   She’s in, it’s off to Vegas for Debbie and her parrot.

60-year old, Juggler, Frank Miles who dangerously juggles 500,000 volt three stun guns while standing in soapy water! Howie said it was great, it was funny. Sharon really enjoyed it. Pierce asks Frank if he comes back to the show, will there be more attempts at killing himself and says yes – Frank gives his vote and Frank is off to Vegas.

32-year old, Udi Abagnale and his two backup singers that he picked up at a Karaoke bar singing Hot, Hot, Hot. The three judges buzzer him within seconds and Pierce calls him one the most deluded people he has ever met. Host Nick Cannon gets jiggy on stage with Udi and three judges walk off the stage. Worst act so far.

The auditions have moved to Atlanta and the first act up is 24 dancers called Miami All Stars. Howie said it was sexy, exciting and phenomenal. Sharon said it was great to see men dance like men, it reminded her of West Side Story. Pierce said it was nice to see woman dance like woman, easily one of the best dance groups. The votes and they are going to Vegas.

The cutest act so far, 5, 6, and 7 year old SH’ Boss boys rapping. Sharon said it was excellent. Pierce liked it and all three judges gave them a yes to Vegas. They were cute, but my guess is that they don’t make it too far.  Their cuteness outweighs their talent.

50-year old, Primityvo Montoya, singer and dancer. Ok, so I was wrong – this is the worst act. He does a somersault and lands head first on the floor, about five feet off the stage. Howie hits all the buzzers and the medics come out to check the guy.

48-year old, Nicole and 49-year old Mike The Crossed Swords are up next with a sword show where they pretend to fight each other. Sharon and Howie press the X buzzer and for once, Pierce doesn’t. Pierce says that he thought Mike was going to decapitate his wife right on stage. Howie challenges Piece to a duel on stage – now the fun begins, but Sharon spoils it by hitting the last X buzzer.   Howie votes no, Pierce votes yes and Sharon is a no – so they are not going to Vegas.

Team Iluminate performing a glow in the dark routine. The crowd liked it and the judges gave them a standing ovation. Sadly, it didn’t have the same effect over the TV. Howie said it was a great technically. Pierce said it was the single best audition ever on the show and no doubt will be a huge act in Vegas. All three judges give them yes to Vegas.

Come back next week when America’s Got Talent airs on Tuesday and Wednesday.