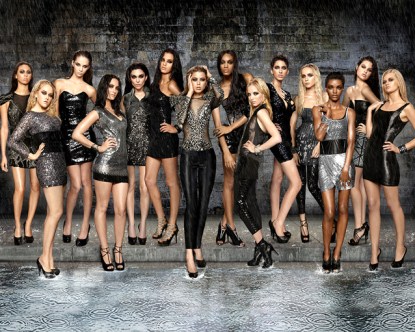 America’s Next Top Model started a brand new season tonight and we have a recap for you.  Can you believe it is Cycle 16.  Fourteen girls will face Tyra alongside the two other judges, Andre Leon Talley and Nigel Barker.   The winner of Season 16 of America’s Next Top Model will win a $100k contract with CoverGirl as well as an exclusive deal with Italian Vogue.

Mr. J tells the girls that there is no panel and gives them envelopes.  He tells them if there is a photo they are not going home.  He leaves the room with the girls who have a photo and the girls who don’t have a photo spend the time crying and whining because they have to go home.  They go to get their luggage and they are told Tyra wants to say goodbye.   Tyra tells them she has gotten turned down many times and then she tells them they don’t have to go far to go home, because they are already home.  The girls were punked by Tyra and the girls are actually the 14 contestants.

The girls find that there are 12 beds in the house and 14 girls so they assume two of them will go home tonight.

Dominique,23, from Texas is already going to be annoying she was behaving like the leader in the house and I can tell she is going to be trouble.

The girls get Tyra mail which says “Let’s get the ball rolling.” The girls arrive and model and designer Erin Wasson is there  – they are going to model some of her jewelry and Alexander Wang’s clothes.  Today is their first runway show and they are going to walk on a 12 inch board in a bubble over water. Sounds scary!   The photographer of the episode is Russell James.

They have to pretend that the bubble they are in is invisible.    The inevitable happened Ondrei, 20, from Florida fell in the bubble in the water.  She does admit before she starts walking that she does not have much experience.  I felt really sorry for her!

Brittani, 19, from Pennsylvania was the best she rocked the runway.  The judges agreed and gave her kudos fro being the best.

The girls went home and got the message that they were going to elimination.  One girl would be eliminated and 13 girls are going on.

The guest judge for the evening is Erin Wasson.

Alexandria – the lights love her, Dalya – they love, Nicole – she is not present in the shot, Sara – has something that is quirky and there is a need for quirky.

Ondrei is sweet, Angelia beautiful eyes, Hannah – the girl can turn into a sex kitten, Kasia – they love her Eastern European look, Monique – her eyes are telling stories, Michaela she seems very week

Dominque her picture does not do much for her, Jaclyn she is sweet, Molly it is in the eyes and neck, Brittani she is beautiful and they are a big fan of her.

First girl called – MOLLY and her picture will be displayed in their home.

Runner Up for best photo – BRITTANI

The bottom two are Dominique & Angelia