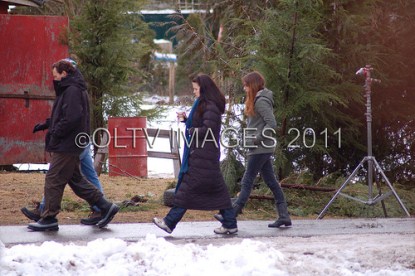 You can make all the plans you want but when mother nature decides it is not going to happen then it is not going to happen.   The Twilight Saga: Breaking Dawn is filming in the Vancouver area and in the mountains and Hollywood New is reporting that the filming has been delayed and Robert Pattinson and Kristen Stewart are getting a much needed break.  I checked the weather channel and it makes perfect sense the mountains are getting a lot of snow.

A fresh amount of snow was recently dumped over the area and apparently put a halt to ‘Breaking Dawn,’ states HollywoodLife. The two were recently in Los Angeles, but just returned to film some more in Vancouver.  Guess it means that the two stars will have a little more alone time away from the set.

So Robert and Kirsten are having a break but they need to stay  all bundled up since it still so cold and snowy there.  I bet they cannot wait to get back to Vancouver and Surrey where it is raining and a lot warmer.   Meanwhile some people are reporting that the couple are spending a fair deal of time apart from each another. There is speculation that there is a problem with the relationship, I am betting they are they just busy – what do you think?