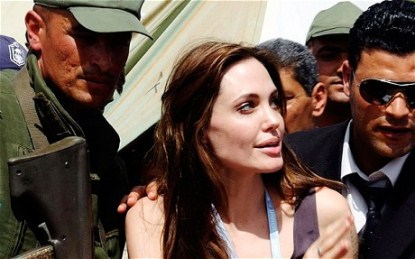 Rumors are running rampant and the world is wondering…. Dear God – are Angelina Jolie and Brad Pitt adopting AGAIN?!?!?   On Tuesday, Angelina met with Libyan refugees, (ok, seriously – how does this woman get to and fro so quickly?) where the mom of 6 also revealed something just plain shocking – another tattoo!  What’s so special about this one you ask?  Well let me tell ya!  The tattoo is directly below the tattooed birth co-ordinates of 6 children she shares with fello do-gooder Brad Pitt.   Is it time for number 7 already??

According to Wonderwall, the co-ordinates match those of Algeria, where she is currently visiting.  Hmmm, kind of makes you think.  Those two have been known to be sneaky and throw us for a loop, but we’re on to you!!!  Why add a tattoo to the only place on your body tattooed significant only to your children.   Angie, you aren’t being very stealth.

To be fair though, reports have also circulated that the co-ordinates are of Oklahoma, Pitt’s birthplace.   Alright, well I guess that’s cute but not nearly as exciting!