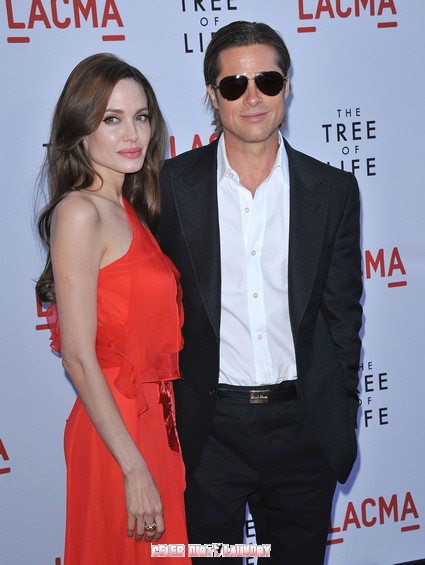 Angelina Jolie is apparently is apparently green with jealousy and losing her cool over Brad Pitt‘s shamelessly flirtation with a beautiful brunette mystery woman on the set of his latest film, ‘World War Z.’

Jolie has been growing increasingly jealous and “paranoid” over what might be a real romance. A leaked photo of the sexy brunette staffer getting “touchy-feely” with Brad on the set pushed Jolie to the breaking point.

Yes, it seems Angelina Jolie actually lost it, and confronted the still unnamed woman whom she now considers her rival for Brad Pitt’s affections. According to sources, a wrathful Jolie confronted the woman face-to-face and warned her:  “Stay away from Brad… or else!”

According to reports Brad was shocked by Angelina’s outburst.  According to an inside source, he tried to calm Angie down by telling her she could trust him.  “…she just doesn’t trust other women around Brad,” adds the source, “because they throw themselves at him.”

More: Angelina Jolie and Her Kids Love To Bowl

Its understandable that Jolie is jealous of other woman in show biz- after all she stole Brad from Jennifer Aniston on the set filming ‘Mr. and Mrs. Smith.’ So maybe what goes around comes around… .