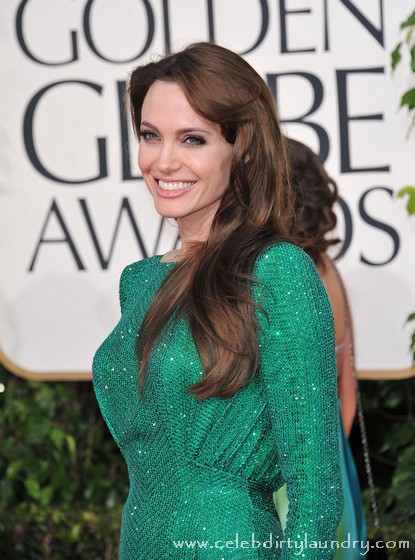 Angelina Jolie is freaking out because she is not Hollywood’s goddess of beauty anymore and according to the National Enquirer she is planning a program of massive emergency high-risk plastic surgery, even though Brad Pitt is begging her not to go through with it.

The 35-year-old Jolie was so humiliated when a survey revealed women prefer the looks of more youthful actresses that she instantly decided to go under the knife for a major makeover, sources say.

Despite Brad’s objections, Angelina wants plastic surgeons to shave years off her famous face with several painful procedures that will put her in the hospital and require a lengthy recuperation, insiders say.

“Angelina is freaked out.  She’s convinced that she’s losing her looks, and she will take drastic measures ASAP,” an insider reported.

“It is as if Angie’s made this surgery her number one priority and views it practically as a full-fledged emergency.  She knows exactly what she wants done and despite the fact that there will be excruciating pain, she’s plowing ahead.”  ‘The Tourist’ star wants a mini face-lift that includes a neck-lift to reduce her saggy jowls, said the insider.

“She also wants to smooth out the creases in her neck, and she intends to get fat grafts to fill in age lines and plump up her face.  To finish off her makeover, Angie wants upper eyelid surgery to lift her droopy eyelids.”

Anose job is also on the agenda, the source said.

“Angie wants to smooth out a bump on her nose and make it look more refined.  She’s always complained her nose is too large,” said the source.

Insiders say the mother of six decided on the dramatic overhaul after leading plastic surgeons discovered women no longer prefer her looks.

Poor Angelina had been on the list for years, and not making it this year sent her into a panic, insiders say.

“Angelina can’t stand the thought of losing her standing as Hollywood’s greatest beauty,” said the source. “She’s convinced her career will start to slide and the only answer is a drastic facial makeover.”

Angelina has claimed that she’s never undergone cosmetic surgery, saying: “I haven’t had anything done, and I don’t think I will.”

Despite her cavalier denial, which we don’t believe, published reports speculate that she could have had a nose job, chemical peels and laser treatments, as well as multiple rounds of injectable fillers such as Botox and Juvederm.

Although insiders say that Brad’s against it, plastic surgeons agree the cosmetic procedures Angelina wants could easily shave years off her looks.

“Fat grafting – where fat from the tummy is injected into the face – can help fill in frown lines and make Angelina’s face look softer and more youthful,” said Dr. Anthony Youn, a Michigan-based board-certified plastic surgeon.

A mini face-lift would cut out excess skin and tighten the underlying muscle layer, and by shaving down a slight amount of bone along the top of her nose, her nose could be straightened out, making it look more refined, he said.

The procedures are not easy to endure, however.  They would take six hours to complete, require about 75 stitches and entail an overnight hospital stay followed by weeks of bruising and swelling, according to the Dr. Youn.

And those aren’t the only drawbacks, experts say.

Angelina would also find it difficult to pick up or hold her kids for nearly a month and would most likely need powerful prescription pain medication – a risky prospect for the admitted former drug user.

The mini face-lift would leave small scars around her ears, and carries the risk of nerve damage that could cause drooping at the corners of her mouth, infection and recurrent nose bleeds.

“Despite the risks and Brad’s worry, Angelina is forging ahead with the secret surgical makeover.    “She’s determined to hold on to her youthful looks – at ANY cost,” the insider said.

As Brad starts to look like Angelina’s dad we will know she went through with her little makeover.