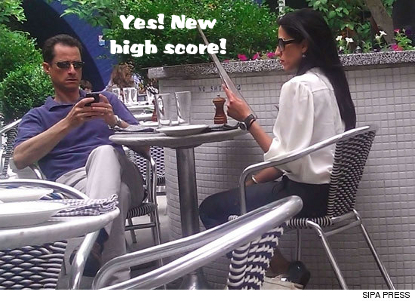 Anthony Weiner is still with his wife — that’s the fortunate (depending on how you view the situation) part. The unfortunate part of the whole thing is that they still look borderline miserable/tense whenever together. I guess tweeting pics of your Mr. Anthony Weiner to other girls will do that to a relationship, huh?

The former congressman and his wife were seen in NYC on Saturday dining at La Bottega in Chelsea’s Maritime Hotel. A witness who spotted them told the NY Daily News that “she looked miserable.”

Reportedly, the two were on their cell phones for the majority of the meal (AKA let’s pretend we have business so we don’t have to acknowledge one another). Really, Huma, you’re still trusting your husband with his cell phone and other forms of technology? Bold move, girl.

Their waiter told the paper that “he’s a horrible tipper. He looked really tense . . . just like he was carrying some intense baggage.”

Intense baggage, you say? I’d say so, my friend.