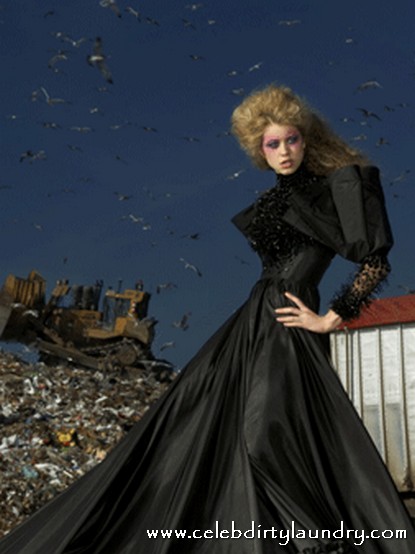 Last week on America’s Next Top Model Mikaela, 22, from Charleston, South Carolina was sent home six girls remain.  I am still in shock that Alexandria is still there she is the most annoying model they have had in a long time.  Crossing my fingers tonight is her last night.  Tonight handbag and accessories designer Lana Marks is a guest judge and the models have to endure a photoshoot with trash.

So without further ado let’s start with tonight’s recap Brittani is talking about how panel was the worst day in her life because she thinks Tyra feels like she is a horrible person. She apologizes to Alexandria about her behavior. The girls feel everyone is better now.

The girls awake to find an agent from IMG models telling the girls that they have until 3 p.m. (4 hours) to complete their go-sees.   Molly is having the most problems she says she cannot read a map and she is getting frustrated.

Molly decides to skip the first go-see and jumped ahead to the second one where she meets up with the Alexandria. The second go-see is an acting one. They thought Molly was not friendly enough. Alexandria booked it because she was genuine. Poor Jaclyn her  accent did not let her do well. The girls went to an athletic company. The girls all arrived on time at Lana Marks .

Kasia, Molly and Alexandria do the best and get to meet with Lana Marks and if they wow her, they will win a campaign and designer swag. Lana asks the 3 girls why they would want to be a part of the campaign, model and the winner is: Alexandria.  Causing all the girls to be jealous again.

They receive Tyra mail that says “A modelling career is a terrible thing to waste” Later, the girls are dismayed to learn their shoot will take place at a landfill, where they will wear eco-friendly couture creations by designer Michael Cinco and be photographed by judge/photographer Nigel Barker.

Kasia – Her biggest issue is her range. The photo they felt was amazing but she has to learn to work her body.  They feel she is hit or miss.  She booked 2 out of her four go-sees.   Jaclyn – Nigel says her personality is endearing and she has to learn to model her mouth. She booked both go-sees she went to.  Hannah – Nigel feels she is second guessing herself. Once they told her the picture was amazing.   She has to work on her confidence.  She booked 2 out of 3 go-sees.  Brittani – They feel the shot is amazing, she looks so high She made it so high fashion it is amazing.   They feel she has amazing potential.  She got to two go sees and she booked both.

Alexandria – Nigel tell her she looks unbelievable. They could see Alexandria was excited about what they were doing and Nigel thought she was beautiful. The picture is haute-couture. She booked every single go-see she went on.  Molly – Nigel thinks she is gorgeous and a great model when she is modelling problem is when you the camera down she complains. They think it is an amazing editorial picture.   She booked four out of five go-sees.

They are going to panel

First girl called & Best Picture –  Alexandria and her picture will be displayed in their home.

Runner Up for best photo – Hannah

The bottom two are  Molly and Jaclyn