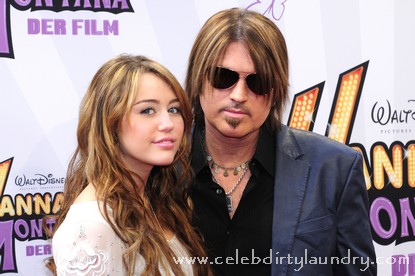 Billy Ray Cyrus recently had an interview with GQ magazine and in the interview he said ““The damn show destroyed my family… I hate to say it, but yes, I do (wish the show hadn’t happened). I’d take it back in a second….”  Now apparently Miley Cyrus is none too happy about the interview and is displeased about the fact that he attacked the Hanna Montana show.  Miley and Billy Ray have reportedly not been speaking for a while and this interview has just made the situation more tense between the two.

Miley claims Billy Ray never said anything during the years she was raking in the money doing the Hanna Montana show and it is unfair of him to speak up now. Miley is now 18 and she makes her own decisions.  Miley wants him to shutup and is nervous he is going to be another Michael Lohan.  She is mystified as to why he would talk to the press and air their dirty laundry in public.

Billy Ray has no one to blame but himself he blurred the lines between parent and child when he co-starred with Miley on the show.  He forgot he was a parent and just enjoyed the money she was making.  If he had watched Miley more and not her money perhaps he would not have so many regrets.    Now that the show is over he wants to step up and be a parent but it is too late Miley is all grown up.

Rumor has it after this interview Miley is waiting for Billy Ray to make the first move.