Are Sarah Palin & The Tea Party On Their Way To GLEE? 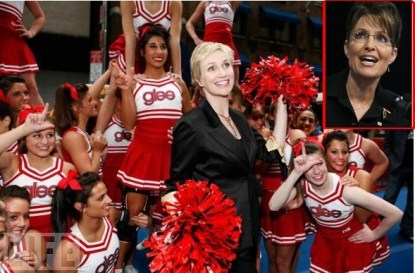 On an upcoming episode of Glee executive producers Ryan Murphy and Brad Falchuck are ready to take on Sarah Palin and The Tea Party.  That is sure to get Sarah Palin all fired up – you betcha!

This will not be the first time Glee has been less than kind to Sarah Palin –  in one of Sue Sylvester’s best quips to date. While reprimanding Santana and Brittany, the Jane Lynch character spat, “You may be two of the stupidest teens I’ve ever encountered — and that’s saying something. I once taught a cheerleading seminar to Sarah Palin.”

I wonder who they will cast – it is difficult to imagine anyone doing a better job than Tina Fey.  Maybe they can get her to guest star!