Are Zac Efron and Vanessa Hudgens Back Together? 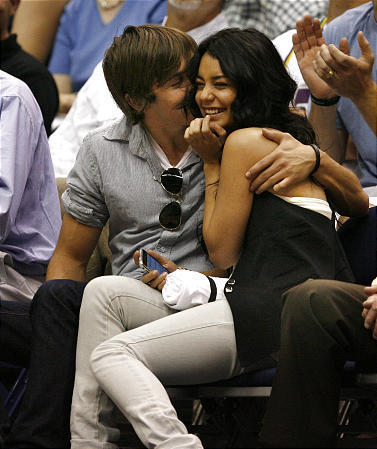 Zac Efron, 23,  and Vanessa Hudgens, 22,  ended their five year relationship last month.  Now rumors are circulating that the couple may be back on.  Friday night they were spotted at the opening of opening of SHG’s Eden Hollywood.  The two look far more like a couple as they flirted back and forth, kissed and hugged.  Zac and Vanessa attended the even with their friend Brittany Snow.

A source said: “Vanessa was bopping around with her arms up while Zac had his hands all over her.  Vanessa had a smile on from ear to ear and the two were inseparable after that.   “Zac sat in between her legs and she wrapped her arms around him.  They were making out on and off for the last hour or so until closing. They acted like there was no one else in the room.”

Apprently the two only stopped when they saw cameras.  What do you think back together or just friends with benefits?